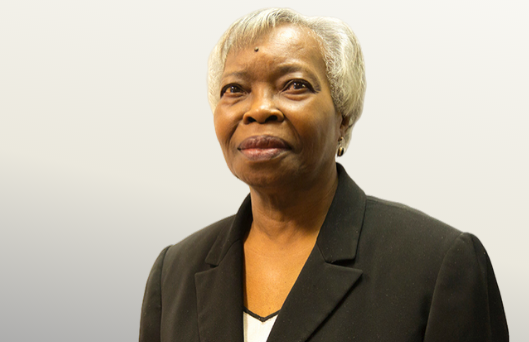 "I believe you do what you can do while you can," said Stella Nash, a public servant, registered dietitian and nutritionist, and a member of Senior Planet Colorado.

I spoke to her via Zoom last week after she had the honor to become one of the Denver Urban Spectrum 2020 African-Americans making a difference. She seemed to me the kind of person who can't help but make a difference – her enthusiasm is contagious and her dedication to the common good is lifelong. But if there was a continuous line in our conversation, it was the value she attaches to education. Stella, born in Goulde, Arkansas, earned her Bachelors of Science in Dietetics from the University of Arkansas and moved to New York City to work as a nutritionist; she earned her Masters in Nutrition Education at NYU. She later moved back to Arkansas to work as a nutritionist at the University's Cooperative Extension Service, but realized that the rural context offered different challenges to the urban environment she had been confronted with in New York. So Stella spent a year studying rural sociology in Penn State.

She puts her own spin on the saying of Kafka: "With education it is better to have and not to need than to need and not to have."

After a long career studded with honor, Stella retired. But she hasn't finished learning yet. She is currently reading The First 90 Days: Critical Success Strategies for New Leaders at All Levels, by Michael Watkins; she has recently The Lost Art of Listening and The New Jim Crow. Completed Last summer, Stella was at a community meeting in Denver when a woman announced that a new technology program would come to Colorado ̵

1; it was free for anyone over 60 and would teach them to use computers and other technology. Intrigued, Stella picked up the phone number and called. It was Senior Planet.

Since the opening of the Senior Planet Center in September last year, Stella has already taken four courses and has become a vital member and supporter of of the program. She is also closely associated with other initiatives that promote the health and well-being of her community: she sits on the board of LiveWell Colorado and on the board of Montbello 20/20, a registered neighborhood organization; she is a volunteer with the Colorado Black Health Collaborative; and she is a member of the Delta Dears, the 60-arm of the Delta Sigma Theta Sorority focused on sisterhood, service and scholarship. But when she spoke with the Denver Urban Spectrum for her award profile, she emphasized her work to spread the word about Senior Planet as her most striking contribution in the past year, saying: "The next big challenge [for the community] uses technology. ”

I contacted Stella to find out more about her impressive achievements in a lifetime. I also have to ask her why she is so passionate about Senior Planet.

"I love the refreshments," she told me laughing. "The coffee is great."

Senior Planet: You were born and raised in Arkansas and trained in Arkansas, New York, Chicago, and Pennsylvania. How did you end up in Colorado?

Stella: My husband was an engineer and moved to Colorado in 1978 for his work. I worked as a nutritionist at the Arkansas State Department of Education, and I thought: I'm not ready to leave yet, so he should see if he really likes it there . Ultimately, the University of Arkansas helped me work there with Colorado State University as the monitoring agent for the Denver County Extension Service. Then a nutritionist position opened at the Mountain Plains regional office for the USDA Food and Nutrition Service, and I got that job.

Tell us about your work there.

There were seven regional offices; this included 10 states and 30 tribal organizations. We worked with the SNAP program, WIC services, school lunch program & # 39; s, the child and adult care food program, food distribution on reservation, the Commodity Supplemental Food Program for aging and food education for people of all ages. We encouraged people to eat more fresh fruits and vegetables and I helped provide training and technical assistance to the nutrition programs. In 1990 I became regional director of the Mountain Plains region.

You probably have a big impact on that role.

Well, all nutritional guidelines set by the federal government must pass through the regional offices every few years. So I helped shape the MyPlate guidelines that are now being used. In 2005, the federal Deputy State Secretary for Agriculture sent me and another person from the DC office to represent the United States at the International Congress on nutrition in South Africa. We have presented eight sessions on the impact of our & # 39; s programs. I was also chosen to participate in the World Food Prize, which is similar to the Nobel Prize in agriculture. In 2016 I received the Rocky Mountain Eagle Award for excellent customer service and in 2017 I retired.

Well deserved! So how did you get involved with Senior Planet?

I want to know what's going on in my community, so I go to many community gatherings in Denver. That's what I heard about it. I always bring a pen and paper to these meetings, and when that woman made the announcement, she rattled a telephone number and I recorded it. I called and spoke with Clarence [the Senior Planet Program Lead]. They were not open yet, but he informed me that he would contact me if they were there. And he did! I showed up and easily registered. I was really impressed.

I have used Computer Basics, iPad Essentials, Money Matters and Social Media. I was also talking to other seniors in South Africa on the Zoom call.

Tell me about the work that you do about Senior Planet. Why is it so important to you?

If you can get what you need, especially if it's free – that really touched me. By working with Senior Planet in this way, I not only get the opportunity to share, but also to give back in ways I wanted but could not when I was employed. I can use what I learn outside of class – everything, even small things that I thought I knew. I work with a group that allows young men to become more independent and I have to use Zoom with them. I put it all into practice. But even if I know how to do something, if the other people in my – I assume you can call it – my "sphere of influence" don't, I can't do much with that knowledge.

I believe in education, and I know from some of the groups I participate in that there is a huge need for people over 60 to learn how to use their smartphones, and so on. Some say: my child gave me this and I don't know how to use it . This is the information age and people need to be informed. And if you are enthusiastic about something, you can also make other people enthusiastic about it.

I tell everyone. After I went there, I sent an email to my women's club, the Delta Dears, to the Golden Age club and other groups that I encourage them to come with. I have worked with friends to distribute maps in my neighborhood to inform people about the center. I was also allowed to speak on Channel 7 for Colorado Gives Day. I want people to know that if there is such a thing as Senior Planet that is free, and you are sitting around saying, I wish I knew how to do this they just had to come. I tell people that there is something for them. And when people go, they discover that they not only learn, but also get the chance to socialize and meet new people.

If you don't do work in your community, what do you like? To do?

I love reading – I read so many books. At the moment I am reading The first 90 days by Michael Watkins. I crochet and knit too. I go to the performing arts center, I go to museums, I go to concerts. I play a lot of Scrabble in my neighborhood. Do you know what I'm doing when I get rid of this call? I'm going to Scrabble.

I understand that you have to travel a considerable distance from home to Senior Planet.

It takes me about an hour through the city on a good day.

What makes the trip worthwhile?

All classes have been good. The teachers are wonderful. Everyone there is so friendly and so helpful. But really, I just love the atmosphere of the place. There is a lot of social isolation among older adults. This is like a meeting place where you can sit next to a computer and hang out with someone. You get to know new people – I like to listen, and I learn what they need, who they are. When you arrive there, you just have the feeling that you are at home.