Alt + Tab lets you switch between open windows, but there’s more than that. The Alt + Tab switch has other useful but hidden keyboard shortcuts. These tips apply to both Windows 10 and 7.

Standard Alt + Tab usage is pretty straightforward. Just press Alt + Tab, hold down the Alt key, and keep pressing the Tab key to cycle through your open windows. Release the Alt key when you see an outline around the desired window.

Alt + Tab normally moves forward, left to right. If you miss the window you want, you don’t have to keep pressing Tab and go through the list all over again. That works, but it is slow, especially if you have a lot of windows open.

Instead, press Alt + Shift + Tab to cycle through the windows in reverse order. If you’re using Alt + Tab and go past the window you want, hold down the Shift key and tap Tab once to go back to the left.

Select Windows with the arrow keys

You can select windows in Alt + Tab with the arrow keys. Press Alt + Tab to open the switcher and hold down the Alt key. Instead of pressing Tab, use the arrow keys on your keyboard to highlight the window you want, then release the Alt key, press Enter, or press the spacebar.

Use YOUR MOUSE to switch and close windows You can also use your mouse with the Alt + Tab switch. Press Alt + Tab, hold down the Alt key, and click the window you want to switch to.

If you use your mouse you will notice a bonus: an “x” will appear in the top right corner of a window thumbnail when you hover over it. Click the “x” to close an application window. This is a quick way to close many windows.

You can use the Tab key, the arrow keys, or your mouse to select the desired window. Press Enter or Spacebar to go to your highlighted window.

Remember the old Windows XP-style Alt + Tab switcher? It had no thumbnail previews of windows, just icons and window titles on a gray background. You may still see this Alt + Tab switcher on Windows 10 for compatibility reasons while playing certain games.

You can also access the old Alt + Tab switcher with a hidden keyboard shortcut. Hold down the left or right Alt key, tap and hold the other Alt key on your keyboard, then press Tab. The old switcher appears, but this one time: the next time you use Alt + Tab, you’ll see the default new Alt + Tab switcher.

With the classic switcher you cannot use your mouse or the arrow keys. However, it supports Ctrl + Shift + Tab to go through windows in reverse, and you can press Esc to close it.

If you really like this old Alt + Tab switcher – and we’re not sure why you would – you can switch back to it by changing the “AltTabSettings” value in the Windows registry. It will then always appear when you press Alt + Tab.

Switch between tabs instead of Windows

You can even switch tabs in reverse (from right to left) by pressing Ctrl + Shift + Tab. There are also many other keyboard shortcuts for working with tabs.

Use Task View with Windows + Tab 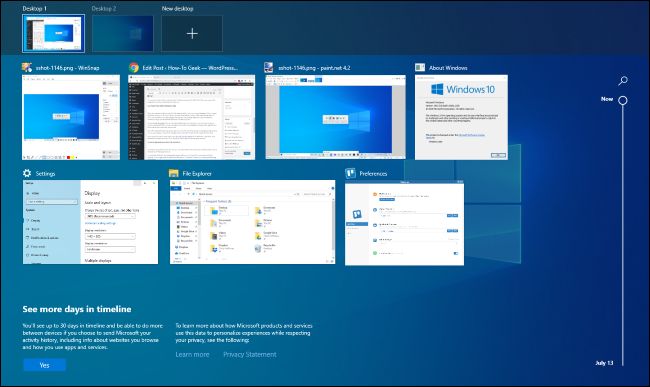 Okay, this one isn’t technically an Alt + Tab shortcut either, but listen to us. Windows + Tab is a similar shortcut to Alt + Tab. It will open the Task View interface, which provides a thumbnail view of your open windows and even multiple desktops on which to arrange them. It also includes the Windows timeline, but you can turn it off if you want.

After pressing Windows + Tab, you can release both keys and use your mouse or the arrow keys to select a window. To move a window to another virtual desktop, drag it with your mouse to the desktop icon at the top of the screen.

This is the same interface that opens when you click the Task View button to the right of the Cortana icon on your taskbar. However, the keyboard shortcut could be more convenient.

At the very least, this is more useful than the old “Flip 3D” feature on Windows 7 and Vista. That felt more like a technical demo for 3D on Windows than a handy window changer. You can also replace the built-in Windows Alt + Tab switcher with a third party Alt + Tab replacement. For example, NTWind’s free Alt + Tab Terminator offers a more powerful, customizable Alt + Tab switcher. It has larger window previews and a built-in “Terminate” feature to close malfunctioning applications. If you are looking for something different, give it a try.

Alt + Tab Terminator is the successor to VistaSwitcher, which we have recommended in the past.