Google is releasing Chrome 88 on the stable channel today, January 19, 2021. The latest browser includes some cool changes, including an improved dark theme for Windows 10 and the start of less intrusive permission prompts. Here are the highlights.

Chrome has been supporting Windows 10’s system-wide dark theme for a while, but Chrome 88 makes it a bit better. The dark theme now applies to scroll bars on many of Chrome’s internal pages. That includes settings, bookmarks, history, new tab page and more. It is not yet present on websites that support dark themes.

No more FTP in Google Chrome

FTP support is an old feature that does not support encrypted connections (no FTPS). An attacker can modify files that you download during the transfer, unlike encrypted HTTPS or FTPS, where this is not possible. With Chrome and other browsers shifting to an always-encrypted web, it makes sense to drop old protocols like this one.

Google has been working on removing FTP from Chrome for a while, but it was still available to some people – and a flag could enable it. Google’s usage data showed that very few people used FTP. Now all FTP support is disabled. If you want to use FTP, you need a separate FTP app.

With Chrome 85, Google removed the Legacy Browser Support add-on when the functionality was baked into Chrome. Chrome 88 goes one step further and disables all installed instances of the add-on.

LBS is designed for IT admins to invoke Microsoft Internet Explorer in Chrome for older apps written for that browser, as well as intranet sites. Since it is now built into Chrome, the add-on is not necessary.

Chrome 88 is experimenting with a smaller and less intrusive way to ask for permission. Instead of the pop-up covering the website’s content, a new “chip” appears to the left of the URL.

The chip is first displayed with full text, such as “Use your location?” After a few seconds it will be minimized to just a small icon. Clicking on the chip, which appears as a blue oval, will bring up the consent prompt that you are used to seeing.

You can now try out the new permission “chips” by enabling the flag at chrome://flags/#permission-chip 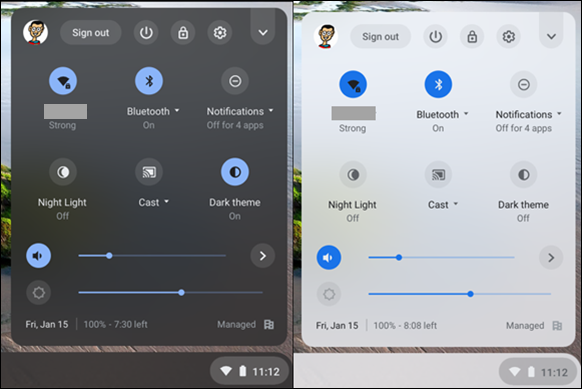 Google is testing more defined light and dark themes for Chromebooks. The theme can be switched from the Quick Settings menu. Themes affect the Shelf, the app launcher, and the Quick Settings panel. Not everything works 100% at the moment.

If you want to try this out on a Chrome OS system, the flag can be enabled on chrome://flags/#dark-light-mode. After you reboot, the theme toggle will appear in the quick settings.

Search tab comes to the desktop

Chrome 87 brought a useful tab search feature to Chromebooks, but it wasn’t available on Windows, Mac, or Linux. Chrome 88 brings it to those platforms via a Chrome flag.

When it is enabled, you will get a dropdown arrow in the top tab bar that shows all your open tabs when selected. You can then use the integrated search bar to find the tab you want.

To get this feature in Chrome 88, enable the Tab Search flag on chrome://flags/#enable-tab-search.

Much of what’s new in every Chrome release is under the hood, and Chrome 88 is no exception. Google has outlined many of these changes on its developer site and Chromium blog:

As always, Chrome will automatically install the update when it is available. To immediately check for and install available updates, click menu> Help> About Google Chrome.